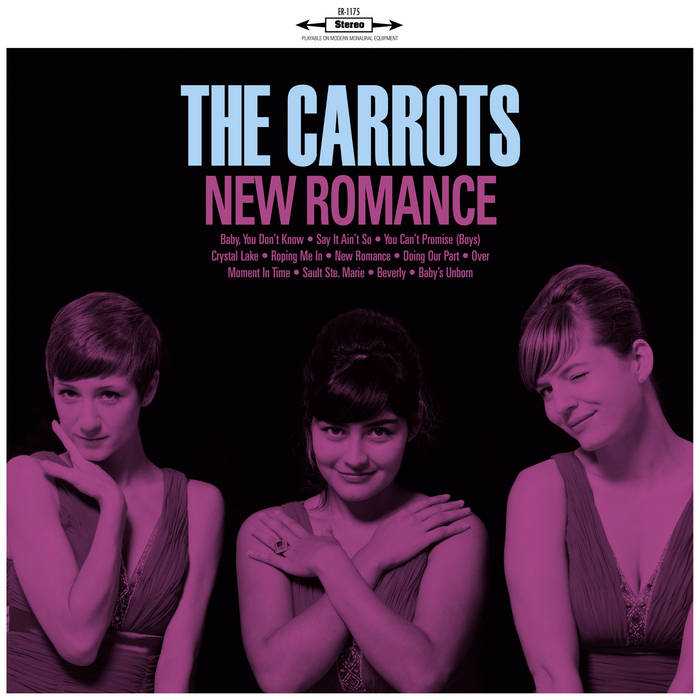 Five years ago, they left us longing for so many more songs, with those incredible, fun singles, “Doing Our Part” and “Beverly” (which were put together for an exclusive-edition CD in Japan). Since then we haven’t heard a lot about THE CARROTS, who have been busy with the countless parallel projects they’ve put together. But suddenly, they’ve finally finished everything up and their first full length, “New Romance”, is here. And with it, the Austin sextet is back to show us their special way of understanding “girl groups” through great songs and marvelous arrangements.

With a line-up solidified by Jason 'Chef' Pittman, Veronica Ortuño, Chris Lyons, Jason Pearson, Shelley McKann and Rose Russo, this album is fresh, with Veronica Ortuño’s versatile voice, capable of carrying songs from the sweetness of Diana Ross to the strength of Dionne Warwick. These past years of waiting have not been in vain, the group has increased their audience in the States, appearing in the media, touring all over the country, playing in some of the most prestigious clubs and bars in their city, like The Continental Club and Antone’s. They’ve played in SXSW, opened for Calvin Johnson (BEAT HAPPENING, K Records), and above all they’ve been preparing a practically perfect collection of songs that remind us how much we like THE RONNETTES, THE VELVETTES, SHANGRI-LA’s, THE MARVELETTES, and THE CRYSTALS, and they link them with contemporary artists like THE SCHOOL, GIGI, THE BANDANA SPLITS and THE YEARNING.

We have proof of this in “Baby, You Don’t Know,” the album’s first track, which puts the cards on the table right away: playful choruses and perfect pop melodies, but this time working with the efficiency of a tighter and rawer instrumentation, without strings or winds, letting the majority of the weight fall on the vocals. That’s why songs like “You Can’t Promise (Boys)” stand out with their more soul-styled spirit, somewhere between an early Marvin Gaye and a Martha Reeves in all her glory. Patiently, letting the excitement slip back into Veronica and Shelly’s soft inflections, songs like “Roping Me In” and “Sault Ste. Marie” softly caress us. “New Romance,” the album’s title track, lets the rhythm & blues spirit tear loose, and is one of the biggest surprises on the album, with echoes of Arthur Conley and Rufus Thomas. “Crystal Lake” is absolutely fantastic, with lyrics about youth, love, infidelity, jealousy… It’s repeated again and again throughout the album, but always situating the love stories in the golden age, when young people began to reveal themselves and decided that love, fun and music were the most important things in life. “Moment In Time” has that free but deeply melodic spirit of HERMAN DÜNE’s best pop songs and BELLE AND SEBASTIAN’s sweetness, with phrasing that is both so open and at the same time so tremendously catchy. And we couldn’t leave their first two singles out; the delicious and contagious “Doing Our Part” and a different version of their perfect teenage anthem, “Beverly”. The album closes with a surprising “Baby’s Unborn,” a delicious piece of minimalism, with scarce guitars, tambourines, and vocals. Because of or in spite of this, it’s probably one of the most beautiful songs on the album, with celestial harmonies and lyrics that wrap the song up in a play on words.

It’s a highly comforting album that flees from the stereotypes and tricks of the style to stand up tall and proud with its own personality and momentum. It was definitely, definitely, worth the wait.

Bandcamp Daily  your guide to the world of Bandcamp